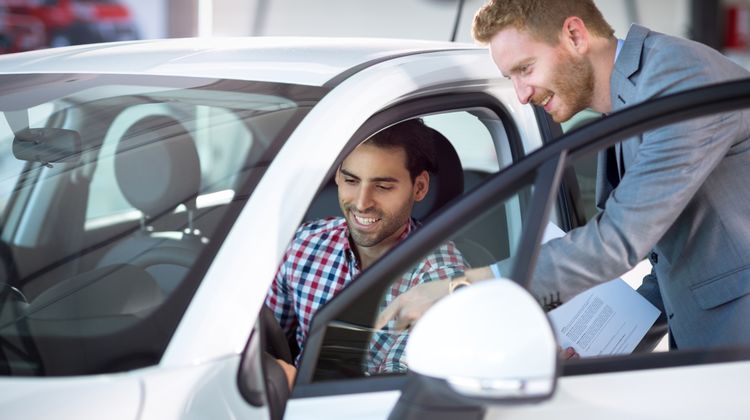 In cooperation with Germany’s market leader for internet new car brokerage, MeinAuto.de, Norstat interviewed approximately 100,000 new car buyers from throughout Germany. All study participants were recruited into a common car panel, a database of over 500,000 end users, which pooled the new car buyers or those interested in buying a new car across all brands and models by means of a concretely configured new car.

Marc Leimann, director of Norstat Germany and co-initiator of the study, says, “When we strongly reduce the presentation of the many fascinating data and facts, we see two central results of the study:

Although the VW emissions scandal “dieselgate” was uncovered almost two years ago, German new car buyers seem to still not have fully “digested” it. In the current study, only 51% of Germans interested in purchasing a new car say that “dieselgate” will have no influence on their next new car purchase decision. 19% of those interested in buying a new car are not sure. However, the view of 30% of the respondents is much clearer: they say that the emissions scandal will definitely have a direct influence on their next new car purchase. 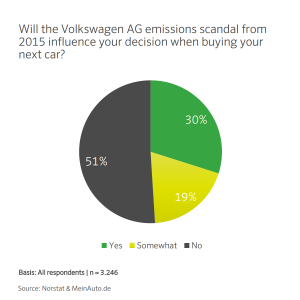 Especially Opel (Vauxhall) drivers seem to be particularly unforgiving, 36% answered “yes” to this question, closely followed by BMW drivers, where 34% answered “yes”. VW drivers themselves seem to be less shocked in this regard and only 26% agreed that the emissions scandal would have an influence on their next car purchase.

This somewhat surprising result strongly effected the further course of the study, and as a result we asked the 30% who answered “yes” how this influences their attitude towards the VW group. And this result should be a cause of concern for Wolfsburg as it has a direct effect on the Wolfsburg sales:

73% of those surveyed said that because of dieselgate, they will deliberately avoid the VW group’s brands during their next car purchase! 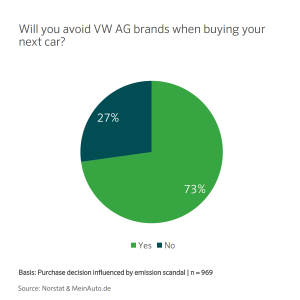 If we make a distinction between current car brands here, today’s BMW drivers are the most horrified. 86% of these said that they will avoid VW during their next car purchase because of dieselgate, closely followed by 85% of Ford drivers. In terms of loyalty to VW, the group brands have the best results (which is not very surprising): only 30% of Skoda drivers say that their next car will not be a car from the group. Seat drivers follow at 33%, Audi drivers at 53% and VW drivers at 62%.

Because the diesel scandal will have such a direct influence on car sales in general across all brands, and especially for the VW group, we analysed what this will mean for diesel motors, the “motor of the future”, as a result. Although 85% of Germans interested in buying a new car said that electric cars are too expensive in comparison to equivalent petrol or diesel models, 7% still say that their dream car has an electric motor. In this respect, petrol and diesel cars continue to perform well (52% and 25% respectively), which is very traditionally German.

However, in comparison with the current registration figures from the Federal Motor Transport Authority (Germany´s “Kraftfahrt-Bundesamt”), these figures are a clear sign of a future shift in market share between the motor types. Alexander Bugge, director of MeinAuto.de and co-initiator of the study, says, “Especially for diesel cars, which currently still have a market share of 38.8%, a clearly negative trend is emerging. Although this figure is still significantly above the 25% market share from the survey, it already documents a decline of approximately 19% in comparison to the previous year. In the first six months of this year, the number of diesel cars registered so far is over nine percent below that of the same time period last year. These are the harbingers of a significantly reduced diesel car market share in the long run”.

Furthermore, something else clearly recorded by the survey: alternative motors are very popular with German new car buyers. Already a total of 24% have decided against petrol and diesel and gone for a hybrid, electric or gas-powered car as their dream car. Therefore, the desire for alternative motors is already at the same level as the desire for a diesel motor − a potentially heavy setback for the previously much-loved diesel. Of course an interesting, yet heterogeneous, picture arises when all different brands are taken into consideration. Above all, the view for Seat is very exciting: 16% of current Seat drivers consider it likely to very likely that they will choose an electric car during their next car purchase. The second highest electric car potential brands are Audi and BMW with 14%, while the German average is 12%.

What’s interesting: 16% of the Seat owners consider it likely to very likely that they will be e-car drivers in the future! What about drivers of the brands which currently do not offer an electric car? Surely this result is also a warning sign to quickly include an appropriate model in their range in order not to lose these sales to the competition.

And this is certainly just one of many exciting results which could be more thoroughly explored through the cooperation between MeinAuto.de and Norstat for the German market research and automotive industries − no least because of the common car panel approach.

View all Posts by Marc Leimann