AMEC Conference report 2016 – The beginning of an era… 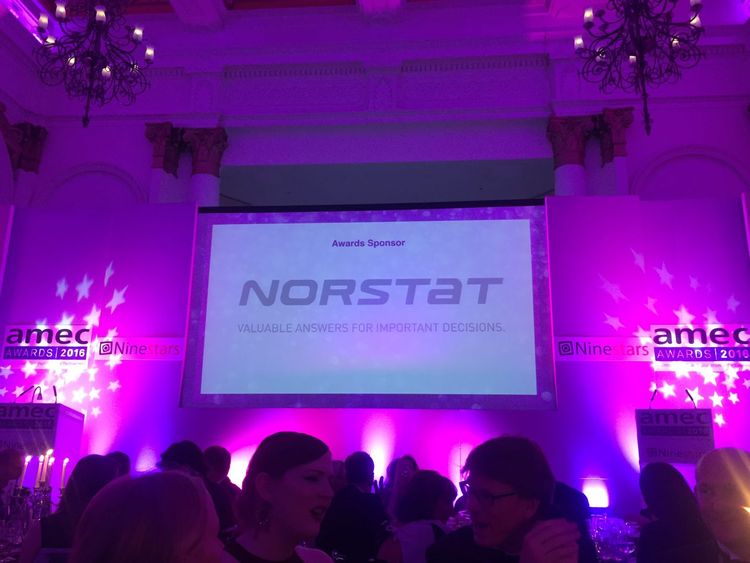 THE BEGINNING – RABBIT IN THE HEADLIGHTS.

So Norstat sponsored the opening ceremony in the Hilton London Bankside. The wine was flowing and I was approached to give a short but sweet opening speech to kick off the evening and of course the AMEC ‘International Summit on Measurement’.  A little ‘rabbit in the headlights’ moment at first but it was great to address the people of AMEC and introduce Norstat for the first time to a new network of very senior new friends.  The stage opened to an ovation but I wanted more, raised my arms and the crowd erupted into cheers.  ‘Welcome to the International AMEC conference, it is a pleasure to welcome you all and it gives me great pleasure to put our great name alongside the biggest AMEC event to date, but enough about what Norstat have done for the event, I look forward to speaking to as many of you as possible over the next couple of days and for now, drink, be merry, and say hi’.  Closed by cheers and glasses raised.  Mentioning Norstat was pretty easy considering I had a huge banner above my head but left the floor open to discussion on who we were among a huge sea of media monitoring companies.  A good opening for what going to be a long few days of meeting, greeting, and storytelling.

Wednesday kicked off with a bang. The stand was perfectly placed to the crowd as they walked to the lectures.  Meeting our neighbours and finding out a little more about what Media monitoring means and open discussion on how traditional research methodologies can help were positive.  A lot of benchmark questions were asked on how we can use our methods to benchmark theirs and theirs for ours.  Rob was just excellent on Wednesday and Thursday.  Potential clients took us both on, questioning who we were, what we do, why we do this.  Over hearing Rob’s story to potentials and new friends was like a bird song.  Not rehearsed but told the Norstat story like a 10 year pro (tip my hat sir).  The day ended with a positive feeling, a mass of business cards, and new friends.  Potential clients and friends included Press Reader, PT News and Analytics Inc.,Buzzcapture, GlobalNews, talkwalker, Weber Shandwick Scotland, Hotwire PR (an old friend), LexisNexis, Sterk Werk, Red Bull Austria, Ogilvy PR, Carma, Prime Research.

The evening started on a traditional Routemaster (old fashioned English red bus) which took us on a short tour of Central London before heading to 8 Northumberland Avenue for the main event.  Champagne reception can’t be too bad either.

I was met by a chap who looked a lot like Joe Davies, only in a tux looking very ‘Bond’.  The pictures speak for themselves.  Looking dapper Joe was pictured with the Ketchum ladies (check out the pics) by myself and the photographer for the event.  Again Norstat was up in lights at almost every opportunity and it was really nice to see and realise our name in the UK is definitely going places.  After 2.5 days of meeting as many people as possible, I think it is fair to say that by Thursday night, everyone knew who we were and what we did.  A lot of familiar faces from the 2 days would pass by, say hello, congratulate our stand, professional approach and ideas started flowing on how collaboration could occur or for the more international contacts, promises to introduce us to their UK colleagues and contacts.

In a truly professional and jovial manner, Joe approached the podium and owned it, building tension with silence before announcing the bronze, silver, and gold winners before leaving the stage with an arm raised to address the crowd.  The crowd soaked it all up and the evening officially began.  The next 2 hours were taken up by a mass of awards, nominees, jokes, cheers, and the odd glass of wine :-).  The evening ended for Joe and I at around midnight where the rain was there to greet us in true British fashion.  A British end to a very British evening.  Overall this was a great event to meet new contacts, potential clients, and meet with some old friends (which I wasn’t expecting).  Alongside some educational lectures, gave some good insight to how the world is changing in the world of communication.  We were told this event might move to Asia next year so shows the true international appeal for this organisation.  A good networking event overall.

Nathan was previously Associate Director of Media at Norstat UK.

View all Posts by Nathan Pereira